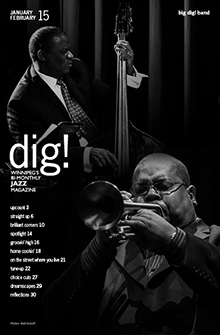 dig! magazine, Winnipeg’s bi-monthly jazz magazine, is pleased to announce the beginning of a new community-based jazz orchestra, The Big dig! Band. Conducted by the University of Manitoba’s Derrick Gardner with Steve Kirby as the artistic director, the big band will be an opportunity for jazz musicians to have their new compositions workshopped and performed by musicians. This new monthly concert series starts Thursday, January 15 at The Good Will Social Club at 625 Portage Ave.

Although a unique idea to Winnipeg, the band’s structure is a lot like the Mingus Jazz Workshops from the late 50s and early 60s. Those gatherings gave people a chance to bring pieces they’d composed, and have them workshopped, with the option to refine them and bring them back, and perhaps even have them performed in a concert setting. This is a big part of the Big dig! Band mandate. The orchestra will workshop compositions and arrangements by local musicians, and offer feedback on the spot, all in an open rehearsal context.

These nights won’t all be workshopping, though. The other face of the Big dig! Band is that it is also a performing ensemble. After the workshop session, there’ll be an intermission, and then the band will present a concert showcasing a wide range of big band material, from the fabulous repertoire and arrangements that have made this format so successful, to lesser known innovative works that rarely get heard, to brand new compositions and arrangements by local musicians.

Whether you’re curious about what happens behind the scenes when musicians learn new music and refine their performance techniques, or if you just want to hear some incredible big band jazz in an intimate club setting, don’t miss the debut of the Big dig! Band!